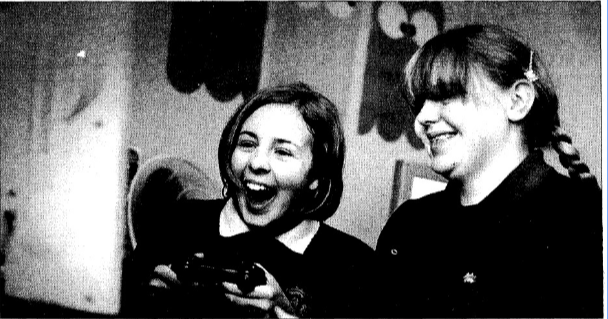 Video games are a popular mode of entertainment in many households. From mobile apps to big blockbuster computer games, to smaller games made with shoestring budgets, the choices are varied and exhaustive. That said, video games in general have a somewhat negative reputation. As a student, I was curious to discover if my favourite games could have a positive effect on my education. I decided to turn to Gale Primary Sources to investigate. Using Gale’s “Advanced search” tool, I was able to search their database for both “video games” and “education”. Here is what I found.

The article below is written by the Times Education Correspondent, Nicola Woolcock in 2014. The piece introduces readers to the soon-to-be chief executive of the College of Teachers, Professor Angela McFarlane. It is interesting that McFarlane provides a very positive view of the use of video games in education. Professor McFarlane thinks that games can be used to supplement traditional learning – but only if they are used correctly. Young children, she elaborates, must be supervised when playing these games. While games can teach children “resilience, concentration and problem solving”, McFarlane is concerned about “computer games [being] used as a babysitter for hours on end” or age-inappropriate games being given to children. Ultimately, she argues that games can teach valuable life skills, but they are not an alternative to books.

The Times Education Correspondent had previously covered the issue; twelve years earlier they reported on a piece of government-backed research that concluded computer games offered “education benefits”. The study investigated over seven hundred children between the ages of seven and sixteen years old and analysed the impact of gaming; it found that games such as SimCity or RollerCoaster Tycoon may have beneficial effects on students. These games, focused on planning and managing cities, theme parks and other places, offer a virtual environment where the player must make difficult decisions to succeed. Research found the games may “significantly enhance [children’s] logical thinking”. At that time, the researchers were also “examining ways to integrate these games into the curriculum”.

In 2007, Selly Oak School in Birmingham took an innovative approach to incorporating gaming into education. The article below describes how students were rewarded for good schoolwork and behaviour with access to video game consoles at school. The head teacher, Mr. Graham Ridley, suggested that the scheme may be more effective than “house points” systems due to its relevance to students’ everyday lives. The video games are part of a wider reward and punishment system where even detention is motivation based; those who attend their Saturday morning punishment receiving small treats. This system is under constant revision, Mr. Ridley asserts; children who are not rewarded are free to “get up and say why they should get one” and decisions are often changed based on the students’ feedback. Using this method, Mr. Ridley claims the amount of disciplinary action has been halved.

I also found two articles from 2009, one in The Economist Historical Archive and one in The Times Digital Archive, which discuss an innovative new school set up in New York called “Quest to Learn”. Led by game developer and professor Katie Salen, the school seeks to abandon traditional “chalk and talk” teaching methods in favour of a more interactive learning experience. It seeks to keep children engaged using ninety minute “blocks” of different educational games. One such game teaches children about “history, geography and public policy” by putting them in the role of a Spartan planning a battle against an Athenian enemy.

In conclusion, it seems there is a significant consensus that video games can be helpful when used as a learning aid, whether as an incentive, or as part of a more advanced learning strategy such as developing the logic skills required to solve puzzles. At the end of the day, it’s important to find a learning method that helps you, and video games might just be that method.

Interested in reading more about the history and cultural impact of video games? Check out ‘The Rise and Fall of Space Invaders in the British Press‘ by Masaki Morisawa.

Evelyn is studying Creative Writing and is currently working on a novel. They have been an avid gamer since childhood. Video games in academia is a topic they have been passionate about since an English class on the medium.