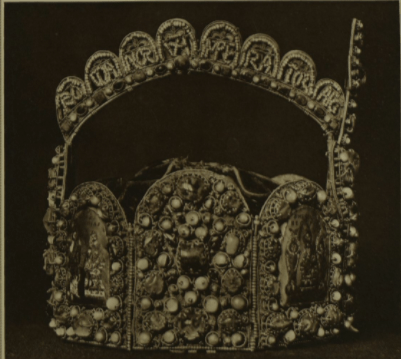 In the Times Literary Supplement Christopher Whitton recounts the transferral of the Codex Aesinas, which contains the only extant copy of the work, from its jealous guardians in Italy, the counts Baleani, to Nazi Germany where Rudolf Till edited and collated the manuscript. It would become the first and last volume of the collection “Ancestral Heritage”, prefaced by Heinrich Himmler. The work was instrumental for the construction of national identity in Nazi Germany. Whitton defines its role as a rallying cry for German proto-nationalism, a centrepiece of the “science” of German studies and a talisman of the Third Reich. Together with other aspects of classical Rome, it was utilised by Nazi officials to legitimise their construction of German nationhood and to align themselves with the martial prowess of Imperial Rome.

Tacitus claims near the beginning of his chronicle that the Germani are indigenous [to their land] and that they have not associated at all with other races through migrations and transactions. This statement was interpreted in Nazi Germany as a defence of the racial purity of the ancient Germani, essential to the reigning ideology. In this sense, politicians and educators sought to underline the “aboriginal” nature of their ancestors, appropriating the authority of classical sources. The introduction to Schumann and Heun’s 1943 history book for “young Germans” characterises the German people as children of a common soil and of common ancestors, who are later described as living in an isolated communion with their land, in accordance with Tacitus’ portrait. In addition, a British handbook on the socio-political evolution of Austria claims that the consolidation of Nazism translated into academic research was speeded up by their reference to late Latin texts relating to the entry of the Germani into world history, which further reflects the use of ancient texts for the formulation of national identity.

On the other hand, additional elements of Roman culture were manipulated by Nazi officials in order to claim a racial affinity with classical Rome, associated in turn with a strong autocratic political system and a militaristic society, which would then be represented as productive of a flourishing civilisation. In illustration of this, declarations of a Napolas (Educational institutions for national politics) executive, recorded in one of the Allied handbooks on Germany, stresses the importance of Latin learning for the education of young Germans. Romans, Greeks and Germans are said to possess the same Nordic soul; while studying Latin acquaints pupils with the immense political achievements … of a racially related master-race as well as with ancient Roman Virtues (virtutes): qualities of the Nordic racial soul (p. 11690).

Moreover, a 1938 Illustrated London News article exemplifies the Nazi struggle to vivify their association with the Holy Roman-Germanic Empire, natural heir to its classical predecessor. Weaponry, together with religious and regal objects epitomising the political success of the Roman empires had been rescued from Austria by the Führer and were characterised by him as emblematic of the pride and greatness of the Old Reich and as signs of hope for the new Empire.

All in all, the reinterpretation of historical narratives to construe national identity in Nazi Germany illuminates Whitton’s final statement: ‘a text is always at the mercy of its readers’.