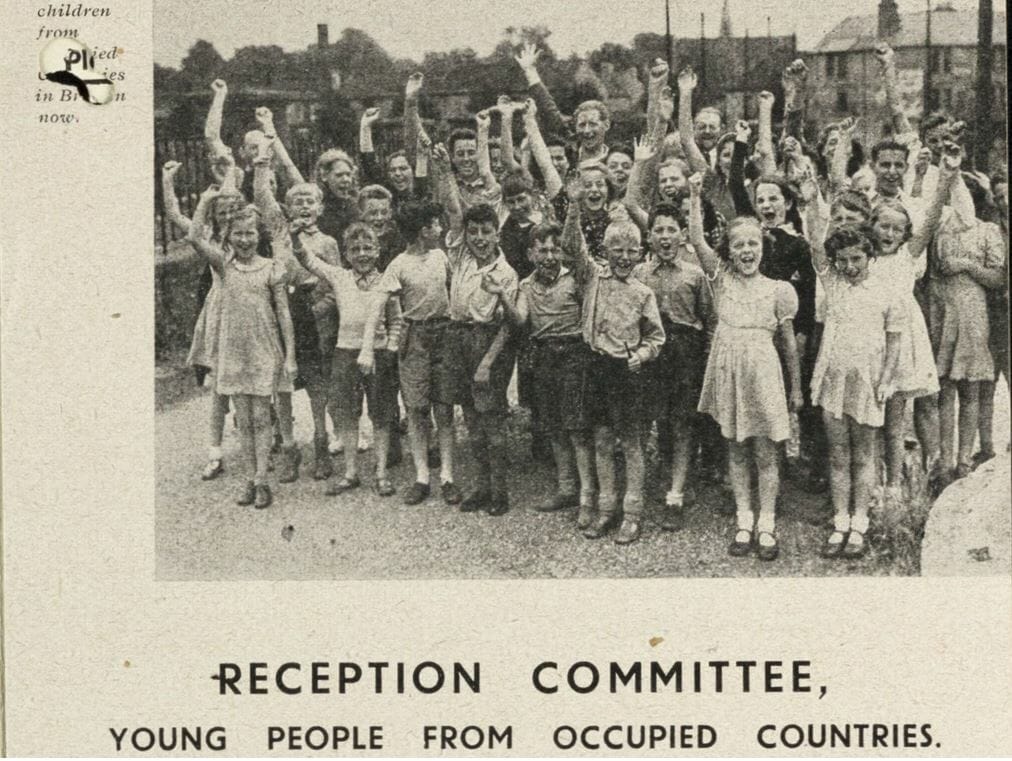 An assessment of privacy concerns is a critical criterion in the development of any digital collection of primary sources, particularly when those sources are relatively close to the present. Additional privacy considerations have also arisen in an internet age, with the easy transmission of information around the world and the perpetual threat of identity theft. The adoption by the European Union and elsewhere of the General Data Protection Regulation (GDPR) in May 2018 has clarified to some degree the approach publishers now take when addressing privacy concerns.

With the decision to focus on the refugee crisis during the Second World War, Gale’s editors sought to balance two key criteria: contemporary relevance and privacy. In terms of global scope, the mass displacement just before, during, and immediately after the war resembles the worldwide reach of today’s multiple refugee crises in a number of ways. At the same time, having occurred over 75 years ago, enough of a temporal buffer exists to responsibly address the privacy concerns that can accrue around any collection of twentieth-century unpublished primary sources, such as correspondence or private reports.

Gale establishes criteria for what private information can appear in consultation with its content partners. Some documents and files are excluded in their entirety, such as personnel reports, bank records, medical data, or case files. Some documents are sparingly redacted, ensuring privacy requirements are met. These redactions might entail striking out parts of names, birthdates, addresses, national identity card numbers, or other identifying personal information. An excellent example appears below from a report on the Sao Thome, a ship that arrived in Jamaica on April 5, 1942 with 561 refugees who had escaped from or were released from French displaced persons camps.

Another vital component to building a high-quality archive is collection breadth. This can take several forms, from how broad a collection reaches in terms of year range, to languages represented, types of content, geographical scope, and other parameters.

For Refugees, Relief, and Resettlement: Forced Migration and World War II, there was a particular emphasis on two of these parameters. One was global reach; the other was national and agency perspective.

The largest contributor of content, the National Archives of the United Kingdom in Kew, helped establish much of the global scope by contributing key documents from an array of government departments, most notably the Foreign Office, Colonial Office, War Office, and War Cabinet. Because so much of the refugee crisis, especially after the war, fell on the shoulders of the Allied victors, the many thousands of files from these various offices representing British interests prove an invaluable source of information on many vital matters. Consider, for example, the map below of the “Provincial Autonomy Plan” drafted by the Research Department of the Foreign Office in July 1946. This map in turn was based on “information taken from a map compiled by J[oseph] Weitz and Z[alman] Lifschitz on behalf of the Jewish Agency,” a quasi-governmental entity operating in pre-Israel Palestine. This document comes from one of hundreds of files—and many, many thousands of pages—addressing the plight of Jewish refugees who, after World War II, had no homeland to which they could be repatriated.

Files from the UK National Archives are also rich in the details on the logistics and key administrative concerns of the many camps for displaced persons scattered throughout Europe. For example, below is one of several lottery cards distributed at a displaced persons camp in September 1946 by members of the Ukrainian Partisan Army (UPA/YÕA), which was seeking to raise funds for its anti-Soviet activities. This 100-unit note as described in a report from November 9, 1946 (below), depicts a Ukrainian soldier holding the Ukrainian flag. Not surprisingly, this highly confidential report from British camp administrators at the Eversburg DP camp in Osnabrück, Germany, documents efforts to quietly quash these lotteries in order to minimize diplomatic disruptions with Russian allies.

The plight of Jewish refugees or Ukrainian partisans in DP camps are but tips of the iceberg when one considers the range of issues addressed by the 439,000 pages of content from the UK National Archives. But to gain a different national perspective, Gale editors brought aboard a new source by including nearly 70,000 pages of primary source materials from the US State Department, all presently housed at the National Archives Records Administration (NARA) of the United States. This content documents American rather than British interests, and even though Allies often shared common goals, they could also work at cross purposes.

Consider, for example, the page below from a 12-page memorandum prepared in December 1939 by the Division of European Affairs of the State Department. The full report surveys the possibilities for the resettlement of Jewish refugees in Angola, Australia, Bolivia, Brazil, Mindanao, New Caledonia, Dominican Republic, and Venezuela. The page below, however, documents the unofficial negotiations that were occurring at the time: “Zeeland appeared highly disturbed at this and observed that Mr. B’s dream of United States of Africa was holy impractical and would not receive the support of any European government… The strongest opposition to any disturbance of the political status quo in Africa and all the colonial powers in Europe are in complete accord in this respect. Mr. Baruch had done a great very great deal of harm with his plan.”

And what harm exactly had “Mr. Baruch” done? Consider first the context of this remarkable document, which records the efforts of businessman Bernard Baruch to negotiate terms with Paul Van Zeeland, the Prime Minister of Belgium just three months after the Second World War had broken out but long after Germany’s persecution of Jews had created a mass exodus. Documented here is Baruch’s mission to leave no stone unturned in finding a national homeland for Europe’s Jews, which would run headlong into the brick wall of European colonial interests, even though Europe’s dominance of Africa would fall to pieces within 20 years.

But even differences in national perspective may not be enough to meet the mandate of collection breadth. Although collections from the UK and US national archives do include correspondence and reports from the various relief and resettlement agencies with which they coordinated efforts, they still reflect closely the interests of government agencies and their official representatives. To see the work of a relief agency from the inside out, Refugees, Relief and Resettlement turns to the work of the one of the earliest actors on behalf of Jewish refugees: The Central British Fund for World Jewish Relief.

Still operating today, World Jewish Relief graciously granted Gale permission to reproduce selected materials from among its administrative records. Through this collection scholars not only get a first-hand look at World Jewish Relief’s efforts to evacuate Jews from Nazi-controlled Europe from 1933 to 1944, but also a view onto the post-war challenges it faced resettling individuals and families in Israel and throughout the world, as suggested in the correspondence headers reproduced here from Jewish organizations in Belgium, Jamaica, Kenya, France, India and Rhodesia.

Agencies like World Jewish Relief were oftentimes the first entity encountered by refugees that took a clear interest in their background—their “story,” if you will—as part of their efforts to determine how best to resettle them. While many of the case files generated by such agencies remain sealed owing to privacy concerns, it is possible to get a glimpse and even hear the “voices” of refugees among their administrative files. A file entitled “Excerpts from Children’s Letters,” collected and dated April 10, 1947, provides an illustration of the powerful contribution agencies like World Jewish Relief made in giving refugees and survivors that voice. The contribution below, retyped (and likely translated from its original German) by World Jewish Relief staff, exemplifies the terrible necessity of recording historical events, even when they are almost indescribably painful.

In the end, the story told in Refugees, Relief and Resettlement is one that we cannot ignore if we are to learn from the mistakes and successes of the past how to address the refugee crises that stand before us now, and in the future.

If you’d like to read more about Refugees, Relief, and Resettlement: Forced Migration and World War II, Rebecca Bowden, Associate Acquisitions Editor for the archive, has written ‘Humanity and Courage: Refugees and the Memory of Those Who Saved Them’. Germany-based Sales Executive Stefanie Meinken has also written an interesting piece about escaping from East Germany.

Blog post cover image citation: From the file “Patronage by Prime Minister of ‘Reception Committee’ Young People from Occupied Countries, 1945,” from the collection Refugee Records from the General Correspondence Files of the Political Departments of the Foreign Office…From the National Archives (Kew, United Kingdom) and reproduced in Refugees, Relief, and Resettlement: Forced Migration and World War II, as image 21 at https://link.gale.com/apps/doc/ELIDPJ047371320/RRRW?u=gale&sid=RRRW&xid=b94d1c69 Bennett Graff is a Senior Acquisitions Editor at Gale. He joined Gale in 2017. When not building an archive, he can generally be found hiking or biking the hill, valleys, and shorelines of his home state of Connecticut.