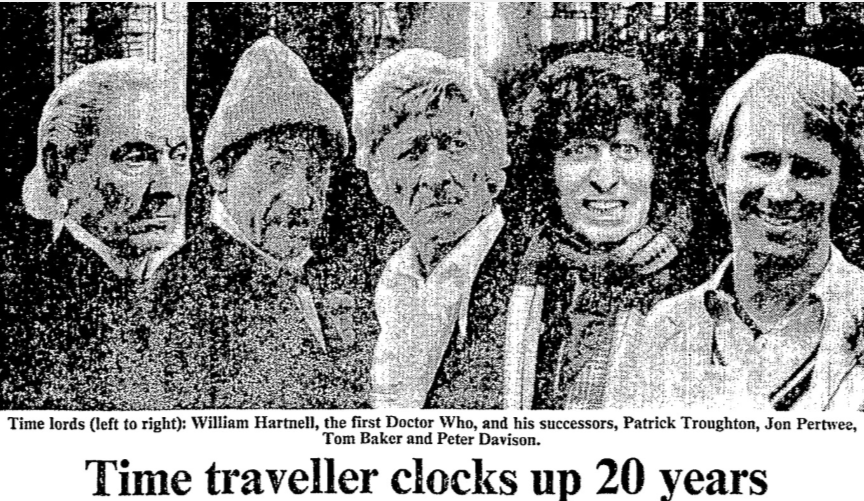 As the show moves toward its twelfth rebooted season (and thirteenth iteration of the Doctor) I find myself contemplating the key to its vast popularity; questioning what factors make the show so loved by its viewers. This can be determined with Gale Primary Sources, as The Times Digital Archive provides numerous articles that discuss the show’s impact on British culture. For the sake of brevity and focus, I’ve limited my examination to the older series, inspecting sources that explore the programme in the original three decades of its run.

Feedback was largely positive from the early days. Julian Critchley’s commentary on the reception to the programme in 1967, now found in The Times Digital Archive, commends the show’s ability to match science fiction with good storytelling, and the “ingenious array of props and electronic sound effects.” Such factors continue throughout the rest of the show’s run (as other sources will prove) and provide a useful starting point when considering the ways in which it became successful.

Critchley goes on to identify another prominent factor that led to the lauding of the Doctor, especially to children: “most important of all Doctor Who’s infallibility is a device that allows even a nervous child to believe that in spite of the most alarming experiences all will be well in the end.” As a pioneering show in terms of British science fiction, the consistent triumph of the protagonist against the unprecedented alien forces struck well with British children, and thus cemented the early success of the broadcast.

By the 1970s, the popularity of Doctor Who was still prevalent – to the extent that there were adaptations beyond the original television series. The Times Digital Archive again proves fruitful, including an article from 1975 which reported on the emergence of a theatre production about the Doctor that was set to travel the country. The progression of the Doctor into a new art form suggests widespread enjoyment of both the premise and series, as well as demand for more stories set in the universe. This play, the first stage production to feature the Doctor, was called Doctor Who and the Daleks in the Seven Keys to Doomsday. In addition to providing evidence of demand (and therefore popularity), the way the title was used conveys other aspects of the show’s success. Marketing the show by using the titles of ‘Doctor’ and ‘Daleks’ implies public familiarity with such fictional species and characters was already so great that their usage would attract larger audiences, thus leading to further success.

Finally, an article by David Hewson that discusses Doctor Who’s continued broadcasting in 1983 offers further evidence that helps us determine reasons for the show’s acclaim. It, rather amusingly, posits the static nature of the show’s set alongside contemporary undeveloped set designs. This helps to emphasise points from my argument above, as it again considers archetypal physical characteristics of the show that made it identifiable and unique, and thus successful. In the same way that ‘Daleks’ and ‘Cybermen’ were easily recognised, so were the flimsy set designs – which apparently did more to increase enjoyment than to diminish it!

Reiterating the importance of a storytelling motif that the first article lauds, David Hewson notes that “[the broadcast’s] success really lies in its brilliant basic premise: that the Doctor and a couple of sidekicks travel around in a London police box”. Hewson’s statement summarises what I concluded from the various primary sources above; Doctor Who’s success arose from the innovative story and character concepts, combined with a consistent premise that was endearing in its certainty. The victories of the Doctor, plus his perpetuated adventures through spacetime, have become as charming and regenerative as the Time Lord himself, ensuring audiences continue to enjoy the show half a century after the series first aired.